Seriously, though, I want to get MimeKit to be as fast and efficient as my C parser, GMime, which is one of the fastest (if not the fastest) MIME parsers out there right now, and I don't expect that any parser is likely to smoke GMime anytime soon, so using it as a baseline to compare against means that I have a realistic goal to set for MimeKit.

Now that you know the why, let's examine the how.

First, I'm using one of those rarely used features of C#: unsafe pointers. While that alone is not all that interesting, it's a corner stone for one of the main techniques I've used. In C#, the fixed statement (which is how you get a pointer to a managed object) pins the object to a fixed location in memory to prevent the GC from moving that memory around while you operate on that buffer. Keep in mind, though, that telling the GC to pin a block of memory is not free, so you should not use this feature without careful consideration. If you're not careful, using pointers could actually make your code slower. Now that we've got that out of the way...

MIME is line-based, so a large part of every MIME parser is going to be searching for the next line of input. One of the reasons most MIME parsers (especially C# MIME parsers) are so slow is because they use a ReadLine() approach and most TextReaders likely use a naive algorithm for finding the end of the current line (as well as all of the extra allocating and copying into a string buffer):

The trick I used in GMime was to make sure that my read buffer was 1 byte larger than the max number of bytes I'd ever read from the underlying stream at a given time. This allowed me to set the first byte in the buffer beyond the bytes I just read from the stream to '\n', thus allowing for the ability to remove the inptr < inend check, opting to do the bounds check after the loop has completed instead. This nearly halves the number of instructions used per loop, making it much, much faster. So, now we have:

But is that the best we can do?

Even after using this trick, it was still the hottest loop in my parser: 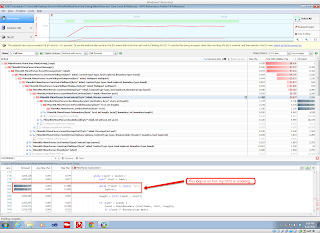 We've got no choice but to use a linear scan, but that doesn't mean that we can't do it faster. If we could somehow reduce the number of loops and likewise reduce the number of pointer increments, we could eliminate a bunch of the overhead of the loop. This technique is referred to as loop unrolling. Here's what brianonymous (from the ##csharp irc channel on freenode) and I came up with (with a little help from Sean Eron Anderson's bit twiddling hacks):

And here are the results of that optimization: 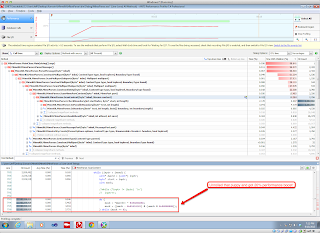 Now, keep in mind that on many architectures other than x86, in order to employ the trick above, inptr must first be 4-byte aligned (uint is 32bit) or it could cause a SIGBUS or worse, a crash. This is fairly easy to solve, though. All you need to do is increment inptr until you know that it is 4 byte aligned and then you can switch over to reading 4 bytes at a time as in the above loop. We'll also need to figure out which of those 4 bytes contained the '\n'. An easy way to solve that problem is to just linearly scan those 4 bytes using our previous single-byte-per-loop implementation starting at dword - 1. Here it is, your moment of Zen:

That's great, but what does all that hex mumbo jumbo do? And why does it work?

When we subtract 0x01010101 from mask, the result will be that only bytes greater than 0x80 will contain any high-order bits (and any byte that was originally 0x0A in our input will now be 0xFF).

This inverts the value of mask resulting in no bytes having the highest bit set except for those that had a 0 in that slot before (including the byte we're looking for). By then bitewise-and'ing it with 0x80808080, we get 0x80 for each byte that was originally 0x0A in our input or otherwise had the highest bit set after the bit inversion.

Because there's no way for any byte to have the highest bit set in both sides of the encompassing bitwise-and except for the character we're looking for (0x0A), the mask will always be 0 unless any of the bytes within were originally 0x0A, which would then break us out of the loop.

Well, that concludes part 1 as it is time for me to go to bed so I can wake up at a reasonable time tomorrow morning.

Posted by Jeffrey Stedfast at 11:31 PM