I've started working on GMime 2.6, which unfortunately will need to break API with 2.4 in order to achieve the next level of awesome.

If you use GMime (or are thinking of using it) in your project and have some suggestions on how GMime can improve, don't hesitate to fire an email off to gmime-devel-list@lists.gnome.org (preferably after subscribing to the mailing-list first).

These are my current plans:

Over the past few months I'm having an even harder time motivating myself to actually make blog posts due to the convenience of microblogging on twitter.com, so this is just a note to say that if you are interested in the things I do or say, you might want to consider following me on twitter.

Email ThisBlogThis!Share to TwitterShare to FacebookShare to Pinterest
Labels: community

First, install GNU's iconv library for Windows. You can get a nice msi installer from http://gnuwin32.sourceforge.net/packages/libiconv.htm. Unfortunately, they only offer a Win32 installer, so hopefully that's the platform you intend to target.

Next, you'll want to grab the GLib headers and libraries for Windows. The easiest way to do that is to go to http://www.gtk.org/download.html and download the All-in-One pre-built bundle for Win32. Once downloaded, extract the zip file (the docs suggest not using WinZip due to a bug) and place them wherever you want (I put mine into C:\Users\jeff\Documents).

Now that the libiconv and glib headers/libraries are installed, you'll want to configure Visual Studio to know where to find those headers and libraries.

First, go to the Tools menu and select Options...: 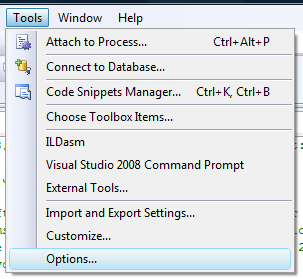 In the Options dialog, expand the Projects and Solutions tree item and then select VC++ Directories.

Make sure Win32 is selected in the Platform option menu and then select Executable files under Show directories for:, like so: 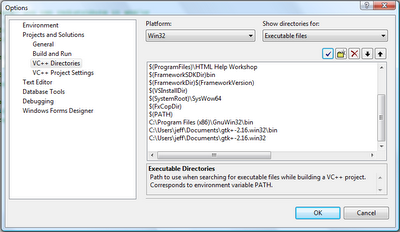 Scroll to the bottom of the listbox and add the bin paths for your installed libiconv and Gtk+ bundle just like in the above screenshot.

After you've added the bin paths, you'll need to add the #include paths. Select Include files under Show directories for: and, like you did for the Executable paths you added above, add the paths to the include files. 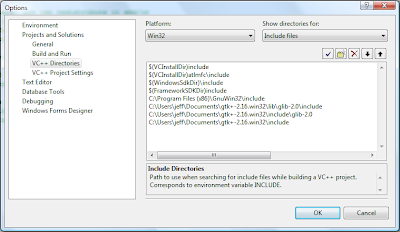 Next, you'll need to ad the library paths. Under Show directories for:, select Library files and add the appropriate paths to the bottom of the list. 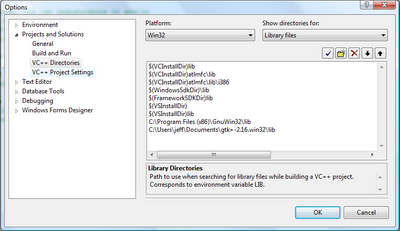 And that's it! You are now ready to start building GMime!

Note: I've been using Microsoft Visual C++ 2008 Express Edition which you can download for free from Microsoft.

Posted by Jeffrey Stedfast at 8:22 AM 6 comments: