I've just released GMime 2.5.10 which I hope to be the last of the 2.5 releases before I release 2.6.0. I feel that I've stretched the development of 2.6.0 out for far too long (2.5 development began at the end of April, 2009) and even though I didn't get around to doing everything I had hoped to do, I feel that the latest 2.5.x releases are such an improvement over 2.4.x that I just want to get it out there for developers to start using. But before I make a 2.6.0 release, I'm hoping to get some feedback and some testing.

New for the release of 2.5.10 is GMimePartIter which replaces the need for g_mime_object_foreach()and its awkward callback requirement, instead allowing you to take the far nicer iterator approach that is popular in the C# and Java worlds (known as IEnumerator in C#). This new iterator, like the foreach function it replaces, iterates over the MIME tree structure in depth-first order.

For example, if you had the following MIME message structure:

The body part-specifier paths would be:

What I Need From Testers

My feeling is that developers will want to use this cool new body part-specifier path functionality for aiding them in implementing IMAP servers and/or clients. Because of this, it would be great if GMime's implementation matched IMAP's specification exactly. The problem is that I don't have the time or energy to verify that the paths work out to be identical in all cases. So... if you are one of those developers who is interested in using this functionality and need it to be identical to IMAP's syntax (or would really like it to be), I'm hoping that you could test it out and make sure that it matches. Especially worthwhile of testing, I'd imagine, is having message/rfc822 parts in the tree. I suspect that, if anywhere, this is where differences may be.

If body part-specifier paths aren't something you care about, don't fret; the rest of the iterator API needs testing as well and if you have no interest in the iterator API at all, perhaps you'd be willing to test the S/MIME functionality (especially since I haven't figured out how to test it myself, given that I don't have an S/MIME cert nor have I figured out how to generate one or add one to my gpgsm keyring).

Your help will be greatly appreciated.

Posted by Jeffrey Stedfast at 3:40 PM No comments:

Debugging Your MonoTouch Apps: The Future

One of the "paper cuts" developers have been having with developing their MonoTouch 4.0.x (and earlier) applications is that for some networking setups, the IP of the developer's workstation detected by MonoDevelop and given to the iPhone or iPad device for debugging purposes is not correct. This often happens if the WiFi is a different network than the network that the developer's machine is connected to (although there are other scenarios as well). 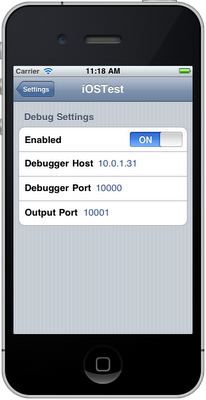 Since it does not seem to be widely known about, allow me to point out that current versions of MonoTouch allow developers to modify the IP that the runtime should connect to for debugging via the iOS Settings app found on any iPhone or iPad (or Simulator). You can see a screenshot of this per-App Settings page in the screenshot to the left. Each of these fields are editable, allowing you to override the defaults filled-in by MonoDevelop.

For our upcoming 4.1 release, Rolf Kvinge and I (but mostly Rolf) have been working on improving this. Rolf has modified the code to check the value of the IP provided in the per-App Settings and if it is set to nil or "automatic", the debugger falls back to checking for a file bundled with the app called MonoTouchDebugConfiguration.txt which can list any number of IP's to try and connect to, each one being on a separate line prefixed with "IP: ". For example:

The runtime will then attempt to connect to each of these IPs asynchronously until it establishes a connection to one of them (at which point it aborts the other waiting connections). This config file solution will hopefully help simplify things for developers a bit by allowing them to pre-configure which IPs to try for their local network configuration w/o having to manually override the iPhone debug settings on the device or simulator.

Posted by Jeffrey Stedfast at 11:42 AM No comments: