For those who haven't been following Moonlight development, I'm the guy that has been implementing all the text layout and rendering.

Let me start off by saying that text is hard. Really hard. Especially layout.

The aspect of text rendering that I've been thinking a lot about lately is hinting. For an example of the difference that hinting makes with text rendering, see the following screenshot: 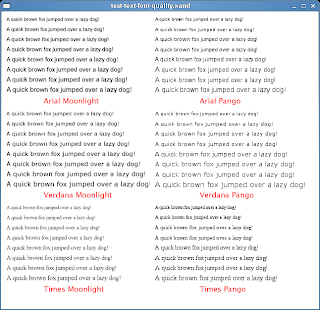 In the screenshot above, I've posted side-by-side text renderings produced by both Moonlight and Pango (courtesy of Michael Dominic K.) for Arial, Verdana and Times New Roman fonts. You'll notice that especially at the smaller font sizes, Moonlight's text rendering gets a bit fuzzy and hard to read. On the contrary, Pango's rendering, using hinting, has improved readability over Moonlight.

Why don't I just use hinting, you ask?

The problem is that hinting changes the font metrics in such a way that as you scale to larger sizes, the metrics do not scale uniformly (you'll notice that as the font sizes increase, the width of the line gets uniformly wider using Moonlight, but not so with Pango). This causes a bit of a problem for Moonlight (and Silverlight) because:

In most applications, the text in each UI element is unlikely to change size (unless the user manually changes the font settings), and so enabling the use of hinting has no adverse side effects. Silverlight (and thus Moonlight), however, are meant to do all sorts of animations which may apply matrix transforms (such as scaling) to any item in the canvas (even text!).

Since scaling has to look smooth, it's hard to use hinting because of the way it changes the metrics.

Hopefully I can find a way to improve rendering quality at the smaller sizes without getting the side effects I mentioned above, or at least have them be far less noticeable.

While not thinking about the render quality of the text, the bane of my existence has been implementing layout algorithms for the 3 different TextWrapping modes used in Silverlight (Wrap, NoWrap, and WrapWithOverflow).

I've mostly been focusing on TextWrapping=Wrap lately as it's probably the hardest one to implement, especially if I want to emulate the Silverlight wrapping behavior (from what I can gather by reading the Pango source code, there are ambiguities in the Unicode specification for line-breaking, so I've been having to familiarize myself with the rules for line-breaking lately).

In the future, I hope to replace my text layout/rendering code with the use of Pango but in order for that to happen, Pango will need a few new features:

In the meantime, having to write my own layout/rendering engine for text has taught me a lot more about text and fonts than I ever wanted to know and I'm continuing to learn more every day.

Update: With all of these custom changes that I'll need in order to move to Pango, I'm beginning to wonder if it's really worth it? The only thing that it could get me is the Unicode line-breaking logic, but the thing is... if I have to implement my own pluggable TextWrapping modes, then wouldn't I still essentially be implementing my own line-breaking logic? This makes me very sad :(