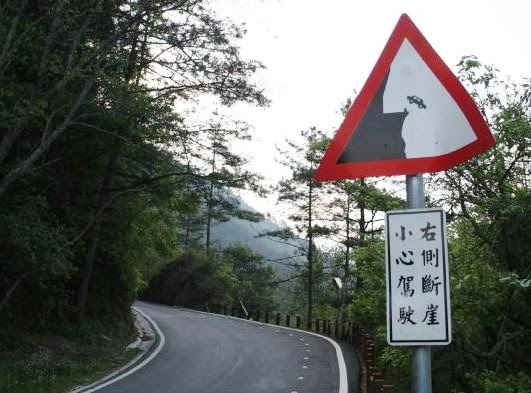 Posted by Jeffrey Stedfast at 10:28 AM 2 comments:

Email ThisBlogThis!Share to TwitterShare to FacebookShare to Pinterest
Labels: humor

Today, Miguel asked me to take a look at fixing some of the System.Console 2.0 bugs. I managed to fix some of the ReadKey() and ReadLine() bugs, although the Backspace bug illustrated in Iron Python is still out there (it appears that the cursor X,Y position is not correctly kept track of in Mono).

Earlier today, when Miguel was explaining to me what sorts of problems existed in System.Console, one of the things he was hoping I could take a look at (although there was no bug # that I know of?) was optimizing Console.Write[Line]().

I didn't actually have time to look at that until tonight when I was sitting at my home computer waiting for my dinner to finish cooking. The solution was fairly simple (for those interested in seeing the patch, check out revision 75806).

An important part of optimizing a section of code is to compare actual running times of the old code vs the new code (and, obviously, to check that the results are correct), so I wrote a simple program that could be measured for performance improvements:

Using the system `time' command, I got the following times:

Anyways, the reason the title of this blog is "Childhood Memories" is because after running this test program, I couldn't help but remember my first assembler program for the 6502 that I wrote back when I was 8 years old - it was a program which filled the screen with the character 'A' (which I then compared to a program written in BASIC that did the same thing). The difference in speed here was about the same as it was back then, too, funnily enough :)

Update: This morning I woke up realizing that I had a bug in my optimization patch last night, but I had a fix that lost no performance and then later today (in part thanks to Alan's prompting me to re-evaluate my need for a temporary buffer, which truly became unnecessary after my fix this morning) was able to optimize it even further (and eliminated the need for a temporary buffer) by blitting chunks of the input buffer between special escape sequences at a time (we have to handle certain escape sequences specially as they can relocate the cursor).

Oh, and the Iron Python bug is now solved... it was actually arguably a bug in Iron Python in that it goes behind Mono's back when writing to stdout so it was impossible for us to keep track of the cursor position. They do, however, use Console.In.ReadLine() (would be better if they simply used Console.ReadLine() but I digress), and so what I did was make ReadLine() query the terminal for the cursor position (rather than rely on our own state).

I think I'm finally finished hacking on the Navigation History feature in MonoDevelop, which started off as more-or-less a direct rip-off of the one in SharpDevelop, but quickly began incorporating improvement ideas from Miguel, Lluis, and myself.

A few weeks ago I had taken a look at some of Microsoft's Visual Studio 2005's and SharpDevelop's context-menu-based refactoring functions and have just stubbed a few of them out in current MonoDevelop svn (added the Rename and Implement Interface items): 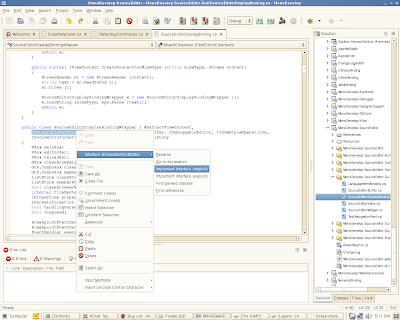 In the above screenshot, you can see the menu we get when right-clicking on the name of an interface in a class definition. 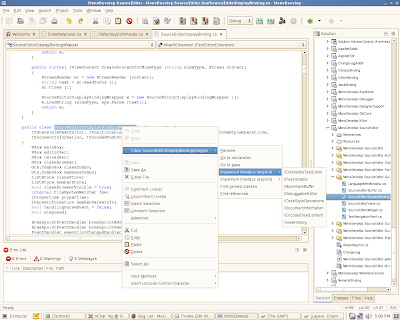 Here, I right-clicked on the name of the class in the class definition.

Going forward, I'll be looking at the refactoring functionality that Eclipse provides along with Intellij's, ReSharper's and Refactor Pro's features.

So far I've really only had time to watch the Refactor Pro demos. They are pretty awesome, but I think the UI bits (at least) are a bit over the top. Certainly not going to be easy to implement. I'll probably be looking at easier approaches.

Came across this in the zsh archives:

The funny thing here is that `opsnssl` doesn't even exist, so his performance comparison is kinda... well, non-existent. It's still interesting, though, because `gmime-uuencode -m` can encode the file almost as fast as it takes the system to realize that opsnssl doesn't exist!

I find it amusing that at the end of his comparison section, he spells OpenSSL wrong yet again ("Ooenssl").

Anyways... we've probably all made goofs like this. I mostly found it amusing because of how awesome GMime is :p

Posted by Jeffrey Stedfast at 9:21 PM No comments:

Just got back from picking up my new bike... got a Specialized Allez Elite Double: 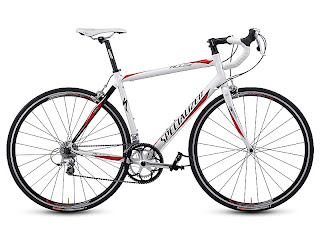 Email ThisBlogThis!Share to TwitterShare to FacebookShare to Pinterest
Labels: cycling

Another One Bites the Dust

Woke up this morning, went to get some breakfast in the kitchen and then heard this really odd whirring sound. At first I thought it was coming from outside, but as I started moving toward my window I passed by my desk and could definitely tell it was coming from my laptop. Sure enough, my laptop's hard drive was the culprit, so I immediately turned the computer off in the hope that I might be able to save my data later if I shut it down soon enough.

I've known I was going to need a new laptop sometime this year for a while (it's over 3 years old now), but I was hoping that I'd have gotten a new laptop before this one died so suddenly so that I could avoid losing all my data. Oh well...

Posted by Jeffrey Stedfast at 11:34 AM 7 comments: