Run! Libertarians want to take over and then leave you ALONE! 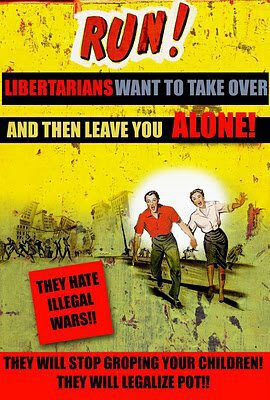 Posted by Jeffrey Stedfast at 11:13 PM

Wait... you're telling me that for the time-being they are groping my children, and will only stop if I let them take over!?

Sir, I refuse to be extorted!

But what if you don't think a Government that "leaves you alone" is the best Government to have? Well then we have an issue!

My government does not represent me in any way shape or form, but they tax me nonetheless.

Welcome news for those who don't need to be protected from anyone, whose rights aren't in danger of violation from anyone, and whose commercial activities are free from competition by people with de facto monopolies thanks to network effects and other virtuous feedback cycles

Also for people who are completely self-sufficient and require no public infrastructure such as water, sewage, police, fire, roads, power, etc

Eff yeah libertarianism, only the strong should survive

Oh yes, there's also the fact that the government-which-leaves-you-alone will do nothing to stop your freedoms being abridged or taken away completely by private employers and others with whom you must enter into contracts with in order to survive

Although I think Slacktivist sums it up better

@jewelfox: Please don't automatically assume that advocates of *less* government want *no* government; some do, but the vast majority do not. I do indeed want a government that protects people and prevents violations of their rights. I'd like non-governmental entities to leave me alone as well (unless I want to interact with them), and I'd like the government to make sure they do so. I just don't want that government to do anything *else* beyond that, and there exists quite a bit of "anything else" right now. We could argue all day about what precisely falls in the category of "rights", but this broad generalization seems like a reasonable place to start.

Fundamentally, I'd suggest that the principle of "my rights stop where your rights begin" applies here. You have the absolute right to require that I not harm you in any way, and vice versa; I'd assume we both agree on that. Given that, it directly follows that you don't have the right to force me to take action to help you against my will; doing so would violate the previous principle, namely by allowing you to harm me. If you disagree with that statement, we might as well stop here, because we will never agree on anything else.

That doesn't make me an advocate of "only the strong survive". On the contrary, I think you'd find me an extraordinarily helpful person, voluntarily.

Also, I think we're getting a bit far afield for comments on somone else's blog post. :)